Given Crystal Palace’s league position, their recent form and the fact we were two down with 25 minutes to play, I’m very happy with a point. Once again, we showed some fantastic battling qualities and I think this result goes a bit further to justify my faith in Clark, because a lot of teams in our situation would have let themselves get trodden on.

As evidenced by today, the belief within the squad is still there, but we need to turn that belief into consistency. It will be tough, because the Championship is such a competitive league, but I feel like we’ve certainly got the capability to do so. If we played like we did in the last 25 minutes of the match for the whole match, we would have easily won, and that’s been a case in a lot of games this season, which is encouraging but also frustrating in equal measure.

I didn’t have too many arguments with Clark over his team selection, but the one questionable decision he made was to put Callum Reilly in central midfield ahead of Ravel Morrison. I know I wouldn’t have chosen that, considering that Reilly had only just come up through the academy, but then again, I’ve never seen him play. If it was my decision I would have probably chosen Morgaro Gomis, but he seems completely out of favour at the moment. Once the game started though, I could immediately see why Clark chose that kid. He seemed determined to make his presence known early on with a couple of aggressive slide tackles, which occassionally resulted in a Palace free-kick, but he added that bit of tenacity in midfield in Spector’s absence. I think we needed that in midfield, because whilst Bouba Diop had a good game alongside Reilly, he’s well into his 30s and having a creative playmaker in the centre like Morrison might have made Diop more exposed to ground that he might not have had the legs to cover. 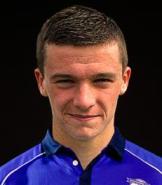 Reilly’s resiliance and doggedness in trying to win the ball back and Diop’s acquired positional sense and aerial ability helped us prevent Palace from playing through us in the centre of the park, but that didn’t seem to be the key to their threats. The style of football they were playing under Holloway was counter-attacking, at a fairly high-tempo and to the flanks, particularly down the right hand side. Yannick Bolasie caused Robinson a few problems, as he was caught out of position several times and forced some stamina out of Wade Elliott, who Robinson occassionally needed to double up with him to stop Bolasie.
Although the game was goalless for most of the first half, it did have it’s entertaining moments. Jack Butland was forced to make a few decent saves, Wade Elliott showed some trickery down the left-hand side that somewhat defied his age, and Blues were briefly 3-on-2 on Palace’s goal when the Londoners lost possession, but Lovenkrands’s looked to have hit his shot a little earlier than he ought to have. However, it was Palace’s right wing that was the source of the opening goal. A cross from Bolasie was scrambled home by their top scorer, Glenn Murray (who I tipped for a goal and am now regretting it).
What concerned me from the first half, was that whilst we looked a bit of a threat going forward, the chances we created were in short bursts. Over the course of the first half, we did struggle to link play in midfield and there were times when we couldn’t string two passes together. Maybe that’s the flip side of having two defensive minded midfield players, because we were missing a player who could hold onto the ball and distribute it with ease. Someone like Paul Scholes or Xavi. But not as good, obviously.
At half time, I didn’t feel outwardly optimistic about our chances, but I did know that we’ve failed to get on the scoresheet in just 3 of our 22 league matches this season, so I had an incling that we could get back into it if we could begin to dictate play more. What didn’t help my confidence though, was that we conceded 15 minutes after the restart due to poor defending of the basics, and Murray was free to tap in and grab his second of the game.
After the second goal went in, Clark made two substitutions that rescued us a point, which I think he deserves some credit for. Firstly, he brought off Wade Elliott and put on Rob Hall, and Zigic on for Burke. They were certainly questionable substitutions, as Elliott had had a good game and Burke is a fan favourite for his ability to run at fullbacks, but the brave subs paid dividends, as Zigic made an immediate impact. He got on the end of Marlon King’s whipped ball in from the right and looped it past Speroni, after what seemed like 10 seconds of him being on the pitch. This gave us a lift.
A ten minutes later, Papa Bouba Diop typified the aerial presence he had provided the team with all afternoon by powering home a header from Rob Hall, the other substitute’s corner to the delight of our fans. However, both sets of supporters were to endure a nervy ending to the game, as either side could have won it. Marlon King uncharacteristically skewed a shot over the bar, when a bouncing ball came to him and he had little time to control it, and Kagisho Dikgacoi headed just wide in injury time.
If Marlon or Dikgacoi had found the net in the closing stages, then I believe it would have been rather cruel on their opposition, not just in terms of the pain of losing late on, but also in balance of play. A draw was probably a fair reflection on how we grew into the game in the second half and produced a very spirited performance, but had we won I think it would have made both of our basic defensive mistakes irrelevant. We’ll certainly be the happier fans, but in the end a draw was about right.
By Gabriel Sutton

One thought on “Spirited fightback”