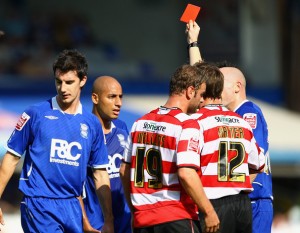 This week, we look into the career of ex-Blues midfielder Mehdi Nafti.

It is easy to forget the contribution that a player as limited as Nafti made to a club. And I mean that with the greatest of respect. He wasn’t a technically gifted footballer, but what he lacked in silky skills, he made up for with determination and solidity.

Born in France, the midfielder started his career at Toulouse in 1997. After coming through the youth ranks, he eventually made 25 appearances. He was never a regular first teamer, but helped them to promotion in 2000.

The following season, he went in search of first team football by joining Racing Santander. For a year, he was a regular for the B team before proving his worth with four seasons for the first team, appearing in over 100 games. Unfortunately, during his time in Santander, they were relegated.

In January 2005, Nafti signed for Birmingham City, initially on loan. Due to his no-nonsense style of play, he earned the nickname ‘Mr Nasty’. But humerously, due to his limited range of passing, he was also given the nickname ‘Mr Short Back n Sideways’ as most of his ball distribution was sideways or backwards. Not that he was ineffective. His tackling, when it wasn’t miss-timed, was hard.

One season, I had a bet on Nafti to get booked in every game. I was up for the season. The idea of his signing was to replace the departed Robbie Savage. Big boots to fill indeed.

Unfortunately, the 2005-06 season was a bad one. After suffering a cruciate ligament injury in a pre-season friendly, Nafti’s only league appearance that season was the final day against Bolton, after which, Blues were relegated. He did play a helping hand in their return to the top flight. He made 32 appearances in the promotion season of 2006-07.

After being released from Blues, he signed for Greek side Aris and helped them to a fifth place finish.

Since then, he’s played for Real Valladolid and is currently at Murcia.

Nafti has 44 caps for Tunisia.

Why I’m sticking with Clark »
« Langansday @ The Royal George