With the West Midlands derby between Wolves and Blues just four days away, we look into the career of a striker who has played for both clubs…STEVE CLARIDGE.

Its funny to think that Steve Claridge is Blues’ last striker to score more than 20 in a season… Back in 1994-95. That not only shows what a quality player he was, but also how badly Blues have lacked goalscorers.

During the Barry Fry era, Claridge was the top striker in Division 2 (now league one). The exciting football Blues played, the ‘however many you score, we’ll score one more’ philosophy certainly benefited a player like him.

The reason I’ve chosen to write about Claridge rather than some of the other players who have played for Blues and Wolves is simple, I’m backing Marlon King to smash the 20 goal barrier this season, so the plaudits for Claridge’s goalscoring achievements have to be bought to the fore while they still exist.

His longest spell at a club came in between 1985 and 1988 at Weymouth during his first of three spells at the club. He made 110 appearances during this time. 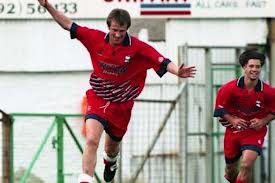 In his 828 career appearances, 88 came whilst at Blues, only five for Wolves. For Blues, he netted on 35 occasions, 25 in the 94-95 double winning season (if you can call the Auto Windscreens Shield and Division Two the ‘double’).

With his socks rolled down, Steve was an asset to the clubs he played for. His personal problems in the form of gambling never got the better of his career. Barry Fry was a personal friend of his, often helping him out of trouble.

At the end of this campaign it’ll be a long overdue 18 seasons since the Blues 20 plus goal barrier was broken, assuming King does it this term.

Claridge can be seen as a pundit on the BBC’s Football League Show on a Saturday night… Sharing his expert knowledge on the game.

Have there been any strikers put on the Blues shirt since Claridge who have been as good? Many argue the case for Mikael Forssell, Christophe Dugarry and even King. The Force was definitely a god send when he was on loan but injuries put paid to his Blues career. Dugarry was genuine world class but hardly prolific in front of goal and King is our current goal machine. But Claridge will still take some beating.