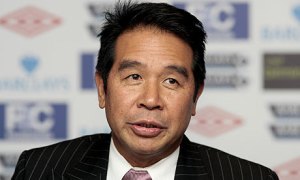 As we huddle against the drizzle, russet leaves floating imperceptibly downwards on the chill October wind, light fading fast, we ponder the bleak present and the dismal future. The team not performing. The manager clueless. The support disenfranchised and noticeably absent. The owner skint and in the pokey. Devastating. It was ever thus. Or was it?

When Carson Yeung Ka Sing completed his protracted takeover just over 3 years ago, the Blues faithful were delighted to bid adieu to the Gollivans, the Cockney wide boy porn merchants who has bled the club dry and failed to invest. Alternatively, said plunderers had plucked the club from mediocrity and invested wisely over a number of years. The club was solvent, profitable even. The ground had been remodeled and modernised. A professional infrastructure and organisation had been created. Regular Premiership status was established, albeit based on the yo-yo principle (similar to the Black Country boing-boing model). However, as in all relationships, things had become a wee bit sour and the sell-by date of this particular owners/fans cohabitation had expired.

Cue Carson. The fact that an unknown (in Europe) Hong Kong entrepreneur was willing to rescue the club from these monsters for more than twice its value caused barely a stir in the corridors of Soho Square. The new majority shareholder possessed a single head, a pulse and a wedge and was deemed to be suitably qualified to own one of football’s finest sleeping institutions. A brave new world beckoned and much speculation ensued about the wealth and influence and connections of the new benefactor.

Twelve months later, the new lovers found themselves in a giddy passionate embrace. A quote from the time illustrates this:

“When Carson first bought the club I remember saying I was cautiously optimistic but it’s built from there and I’m very optimistic about the way forward,” Kevin Ball from the Blues fanzine Joys and Sorrows told the BBC. “What the board have done in 12 months is phenomenal compared to where we were under the previous regime. The club have taken time to listen to the fans and responded. I feel a part of the club now, whereas I didn’t before.”

After finishing ninth in the Premier League in 2009/10 (Blues’ best finish in the top flight for more than 50 years), more investment followed that summer, with Ben Foster and Nikola Zigic among those arriving for a combined £15m. Former Arsenal star Aleksandr Hleb also joined the club on a season-long loan from Barcelona. Financial stability, success on the field, a former international manager, talk of expanding the ground capacity. Truly loved-up we were. Farewell jellied eels. Hello prawn crackers.

Then, of course, that glorious Wembley trip. The most significant achievement in the club’s history if you discount the two-legged 1963 League Cup win over the neighbours, when the trophy was much less prestigious than it is now. London belonged to Blues. Birmingham belonged to Blues. That journey, built on a pulsating run that included emotional and euphoric victories over Villa and West Ham, proved to be the pinnacle, the zenith. As the wheels disengaged themselves from the shiny new carriage, sending drivers, passengers and chattels shuddering earthwards, normal historic service was restored. The heroes of the cup final failed to either a) perform or b) turn up, as the rest of that glorious season crashed agonisingly into the turf. Avoidable failure was passively embraced.

Off the field, of course, the paint job had already started to chip as the holding company revealed heavy losses. The absence of Premiership moolah and status – and the smell of financial crisis – sent crest-snogging heroes scurrying to new arms, as the Wembley-winning assets were cashed in. And then came the money-laundering bombshell. Little wonder that The Scottish Manager decamped to the arms of the woman next door. Never did a couple more richly deserve each other, came the cries of the jilted faithful. And how they laughed when the adulterer was cuckolded a year later…..

Desperation and penury bred more success, as a season that promised little became a great adventure, Blues fans spreading their bonhomie and famous battle songs to far-flung corners of the continent. Bosmans, loans and freebies were welded by sound organisation and an iron-clad team spirit into a fighting unit that just missed qualification to the knock-outs and finished a highly commendable fourth, losing out to Blackpool on another emotionally-charged and electric play-off night at Stans. Chris Hughton’s resurrection was mirrored by that of Blues, as his understated strength carried the club to the brink of more success, on the back of huge individual and collective performances by the team. Alas, one or two people noticed and Chris was enticed away to the land of mustard and insurance. More assets were cashed in as the severity of the financial situation bit, and more loanees and Bosmans arrived, under the stewardship of the raw but highly motivated Lee Clark.

It would be premature (personal opinion) to judge the potential of this manager and this team. Too early. Too many changes to bed in. Gossamer thin squad. Club skint. But everyone now, apparently, up for the fight.

The constant has been Peter Pannu, who has evolved from inexperienced barrister / copper / bouncer to the wielder of power and the man who has kept the keel upright and even.

As we contemplate (prematurely) the bleak prospect of a season without success, of survival and not progress, of continued financial uncertainty (with the frisson of excitement of another potential takeover), it’s maybe time to take stock.

On the sour side of the ledger, there have been a number of failures: FA incompetence, the shame of association with potential wrongdoings, cultural misunderstandings, miscommunication, an avoidable relegation, severe financial issues.

On to the deserts, there have been many sweet spots: The League Cup, Europe, highest top flight finish for 50-odd years, longest unbeaten run, Fortress St Andrews, some top class players recruited, a professional administration, some excellent and promising youngsters blooded. A major shareholder, if misguided, committed to investing in his dream.

When we look back objectively, a wee while down the long, long road, our collective memory perhaps no longer fogged by emotion and unrealistic (and unBluesesque) expectation, we will perhaps see these 3 or 4 years as a bit of a golden period for Blues, with undreamt-of heights and success. Despite the shame of the financial shenanigans, despite McLeish, despite the paucity of resources, the Sleeping Giant finally stirred, opened its eyes, yawned and breathed some life into the long-dormant expectations of this stoic, indulgent breed. Of course, who knows what that future might bring, but in the context of the 137 years of bitter-sweet history, rarely was so much achieved in so short a time. Sweet.

Thank you, Carson, and so long. We love you long time……..maybe.

One thought on “Sweet & sour: Blues under Carson Yeung”