Can Clark & Blues turn it around? 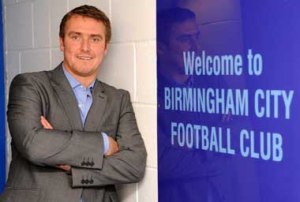 June the 7th, 2012. I remember it well. You may be forgiven for thinking that it was a fairly unconventional day, (apologies to those with births, deaths and marriages) but it was significant if you are a Blues fan. It was the day Chris Hughton signed for Norwich.

Now that in itself may have been an expected consequence of failing to get promoted, and I don’t know many Blues fans who have anything but praise and respect for Chris, and wish him well, albeit begrudgingly, although I guess there will be some who are currently smiling wryly about his predicament in the top flight.

What has happened since though, is far from expected, and is worthy of close scrutiny. We could argue all day about the appointment of Lee Clark. There is little point, he is our manager and until that situation changes he is what we have. I supported his appointment personally, maybe without knowing much about him, but I felt on paper, out of those who were in the running and willing to come, he had maybe the best CV for the long term. There are those that didn’t want him who are now furiously shouting “I told you so” at this article, and those who are shouting “get rid now”! You may be right? Let’s be honest, it’s the way football is today. Instant results are required, and the axe will fall swiftly on those who can’t provide them.

Certainly the initial signs aren’t good. Let’s look at the results. A good start against Barnet in the cup, followed by a very mediocre 1-1 draw against a Charlton side that looked better than us on the day, followed by 3 away defeats, including a particularly poor performance against Watford, a defeat to Coventry in the cup, a home win against struggling Peterborough with a bizarre goalkeeping own goal, then a draw against a well fancied Forest side after we were 2-0 ahead, a more encouraging performance and home win against Bolton, the debacle that was Barnsley, the best result of the season winning at Brighton, then losing to Cardiff when perhaps we deserved something, and the Barnsley sequel against Huddersfield. Not really inspiring is it? In fact the manner of the performances in 60% of those games was not particularly acceptable. My question is, how come our “Mr Reliable”s from last season have turned into “Mr Beans”?

Our major players are not performing, “that’s for sure” in the words of Steve Bruce. We keep and pass the ball with all the confidence and conviction of a game of ‘pass the parcel’ at a terrorists birthday party. Curtis Davies would have got my vote for Player of the season in May, yet he seems completely at sea without a paddle in September. Chris Burke, another major influence last term, has resigned himself to a bit-part player. I’m not sure we have a midfield? A defence that was solid has sublimated into thin air, even with a potential England keeper between the posts, who actually is one bright spark in the darkness, along with the excellent but unfortunate Paul Caddis. And a side that were finding the net with a tide of regularity are, within 3 months, trickling in a goal a game average in the league.

So, who or what is to blame? I don’t think the boardroom issues are really that significant to the team to be honest. We’ve had no money for three seasons. It was clearly too much for he who should not be mentioned, but Chris Hughton managed on the same resources and policies? There is no question that injuries are having a big influence, particularly in defence. New players coming in will be unsettling as far as the dressing room is concerned, And it’s worth noting that only 50% of our current first team squad were regulars last season. Lee Clark has brought in 9 players, and injected 6 youngsters into the 29 man squad. But one would have expected after 10 games that this issue would be diminishing in its impact, and that the manager would have some firm idea of what his best team is, and who should be playing where. And I think this is where our vulnerabilities lie. Lee has made some strange team selections. The positioning of Hayden Mullins, a so far unimpressive midfielder, at right back when the more suited Jonathon Spector was preferred in midfield against Barnsley is perhaps an example of the point? The team seem to lack understanding, shape, confidence, and any form of a plan. And at home certainly, I have yet to see us come out of the blocks with any vigour, which just invites teams onto us causing more uncertainty on the field as well as the terraces.

The manager has to take the responsibility for that. That’s his job. To motivate, direct, encourage and manage the team. On and off the field. He has to take responsibility for signing a player who he has no intention of playing now, owing to alleged issues with behaviour, when it was well documented that the individual had a tendency to be that way? He has to take responsibility for his own persona when dealing with the media. He has to take responsibility for his team selections and his tactics which at present are clearly not producing the instant results? And let’s be honest, he’s no Chris Hughton yet? I do not know Lee Clark. I have never had the pleasure of meeting him, and it would be a pleasure. And he can’t change his personality. He is who he is. But I know enough about non-verbal communication to see that he presents himself with all the ‘guile’ of a ‘rabbit caught in the headlights ‘when interviewed, and he has to be aware of that and be more positive in his approach, rather that presenting a ‘head down’ shoulder shrugging resigned mentality. That does not help the players or the supporters.

Can he turn it round? Maybe? He certainly seems to have the public support of his senior players. But like I said, I don’t know the man. I’m just a bloke who sits on the terraces. I don’t get to experience the inner sanctum of Wast Hills, so I can’t say for definite what goes on behind closed doors.

I said to my brother Pete, in this division there’s no point making any predictions until there’s 10 games to go. We’ve already seen the “yo-yo anyone can beat anyone’ effect ourselves at Brighton. Two wins and we’re back in contention? Pete says I should keep the faith. He said that to me last season, and at Wembley, and he was right. I am prepared to listen to him again, as I am prepared to give Lee Clarke and his players the chance to show me that this was all just a glitch in the starter motor. Whether the manager can learn ‘on the job’ sufficiently to redress the balance, only time will tell. Yes, he’s inexperienced as they come at this level, but hey, we all have to start somewhere?

What do you think? »
« Darren can be Blues’ Rose